Last spring our group played What a Tanker! by the Two Fat Lardies and we quite enjoyed it. The game is easy to learn, fun, and yet presents a challenge since you are forced to use only the opportunities that the Command Dice for each tank will allow.

So we had another fun night with this easy and light miniatures rules set!

Scenario:
We played a mid-war east front scenario using the Oblique set up which has the Germans start in the bottom right edge half and the Russians start in the top left edge half. The table was set up with a stream running through it which is impassable and also a little lake in the middle, plus the usual houses, crop fields, stone walls, hedges, roads, a couple of hills, and some woods. The woods are not passable. The only stream crossing points are the three bridges, so it was expected that these would be highly contested. I added a little wrinkle by putting in two objectives: On the Russian side a fuel dump and on the German side an ammo dump.

Here is the table setup with each player's tank mat in the corners: 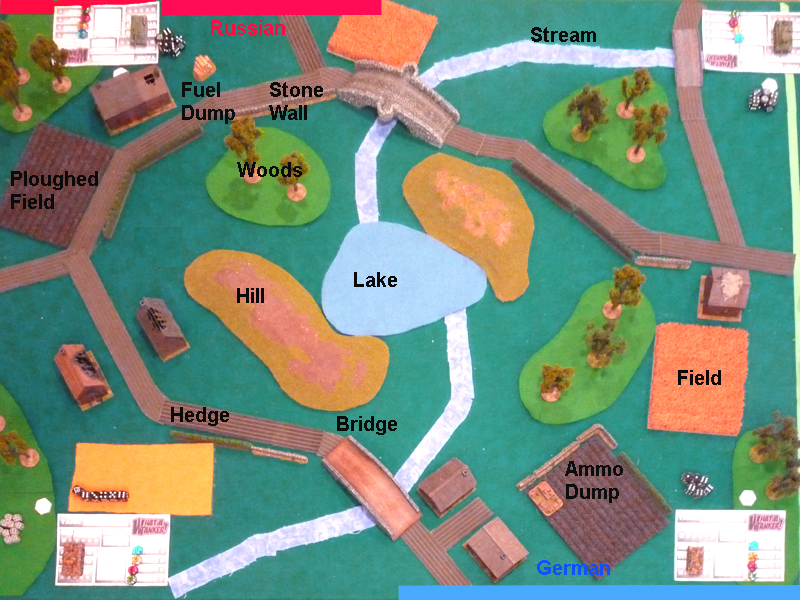 If an enemy objective is captured by contacting them they count as one kill, with credit only once in the game. At the end of the game if one side is still in possession of an enemy objective (last contacted by) a friendly tank, that counts as another kill.

We planned for two players a side but only had three players on game night, so Brent played both Russian AFVs, an SU-85 and a T-34/85. For the Germans, Tim chose a Panther and I took the StuG IIIG. The rules indicate the first German tank must start near the centre of the bottom edge (we chose on the road) and the second tank a foot to the right. The Russians must start their first tank on the centre of the top edge (chose the road again) and the second tank a foot to the left.

We decided to play with the King of The Ring option which means if someone's tank is lost they start the next game turn with a new tank. This keeps everyone in the game. The winner will be the side who knocks out the most enemy tanks when time is up. We play that hull-down on a hill crestline is a major obstacle of -2. These are all gentle hills so just -1 pip from each die for movement.

Turn 1:
The StuG rolls first for initiative so enters on the bottom road and is only able to move onto the bridge. Nobody to shoot at! 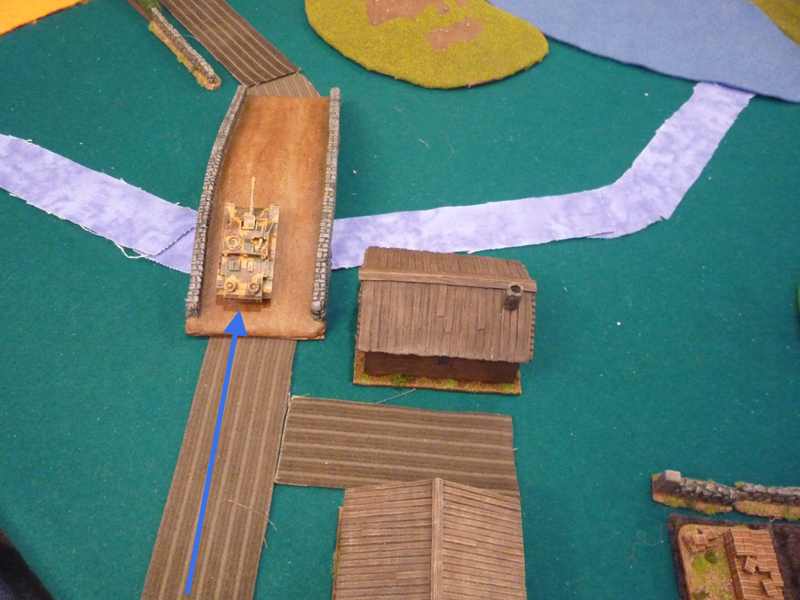 The SU-85 goes next and enters on the top road on the Russian side and is able to move up onto the second bridge and position for a nice side shot at the StuG. The Panther rolls a pile of move dice and swiftly moves most of the way across the board toward the Russian side, hiding behind a hill. The T34/85 moves last and manages to creep forward near the cover of a stone wall. 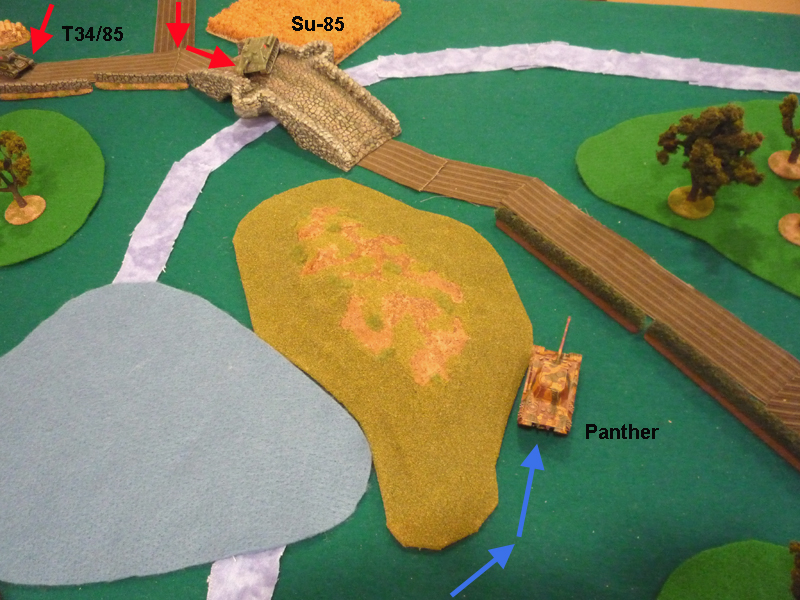 Turn 2:
The SU-85 on the bridge goes first and fires across the lake with a devastating side shot that smokes the StuG! First blood to the Russians! Then, with dice ability to move after the shot the SU-85 moves down off the bridge behind a hedge and lines up for a clear shot on the Panther next turn. The Panther is next and charges up beside the SU-85 for a side shot but misses! The Panther was so close the gun barrel was hitting the SU-85, how could it miss! [Note: Some players use a house rule that allows +2 fire dice if within 6"] 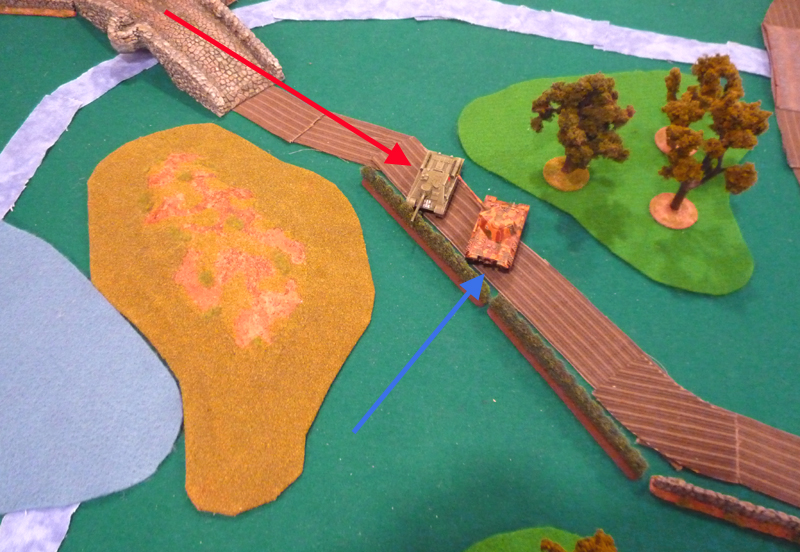 The T-34/85 is last (since the StuG is lost) and seeing the undefended bottom bridge, races around the hills to the left and threatens to cross there. 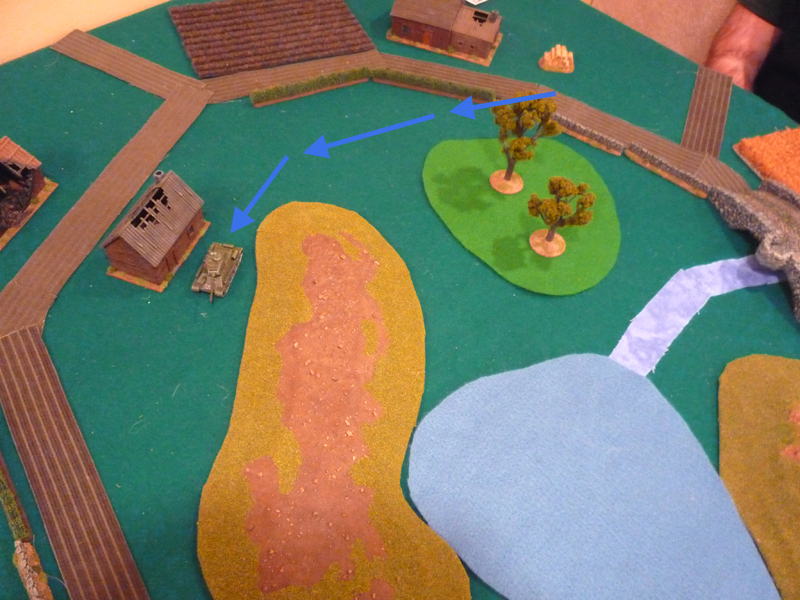 Turn 3:
The T-34/85 goes first and races up just onto the bottom bridge! The new StuG enters next on the bottom road and moves up onto the bridge into a hull down position beside the wrecked StuG and bounces a shot off the T34/85s front armour! 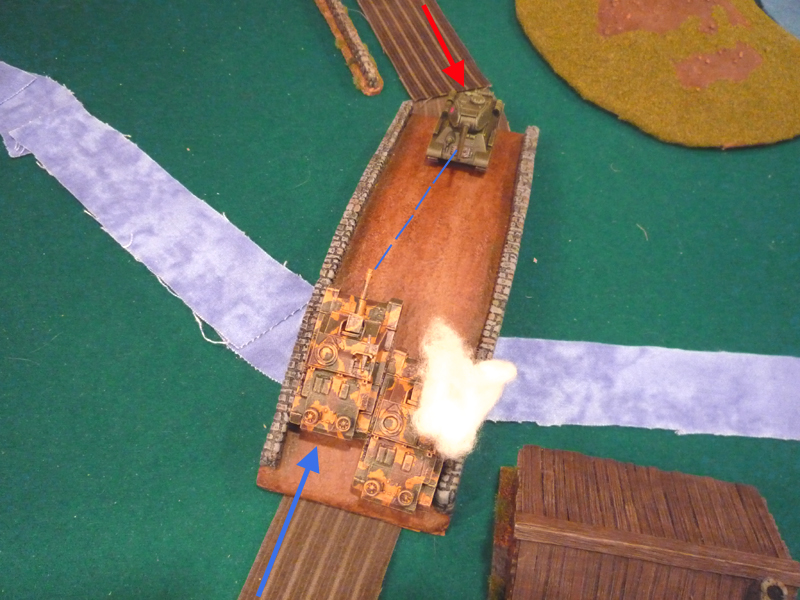 The SU-85 goes next but can only pivot to present front armour to the Panther with no capability to shoot! The Panther then smokes the SU-85! One point for the Germans! Then it moves a bit toward the top bridge, threatening the Russian fuel dump. 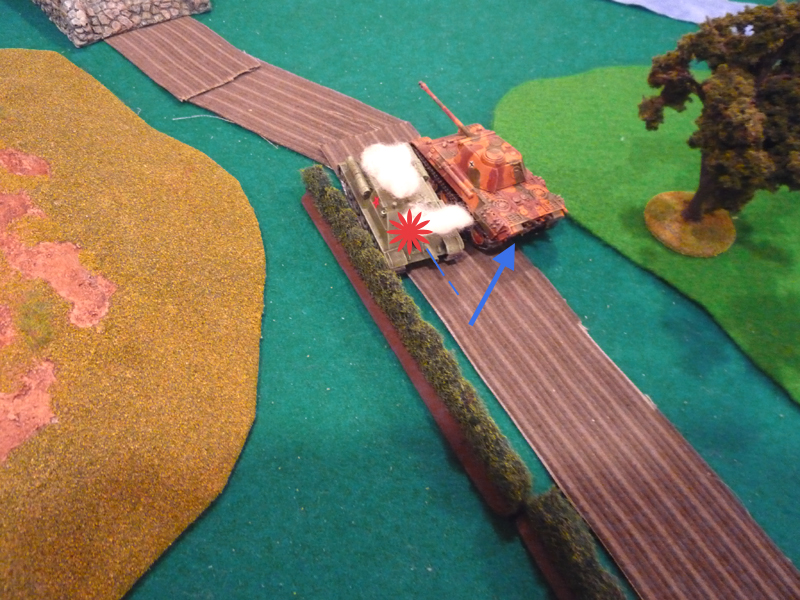 Turn 4:
The T34/85 and StuG on the bottom bridge exchange shots and both hit but their shells bounce. The Panther goes next and moves up near the top bridge. The new SU-85 goes next and moves onto the bridge, still able to fire, and hits causing two temporary damage to the Panther! 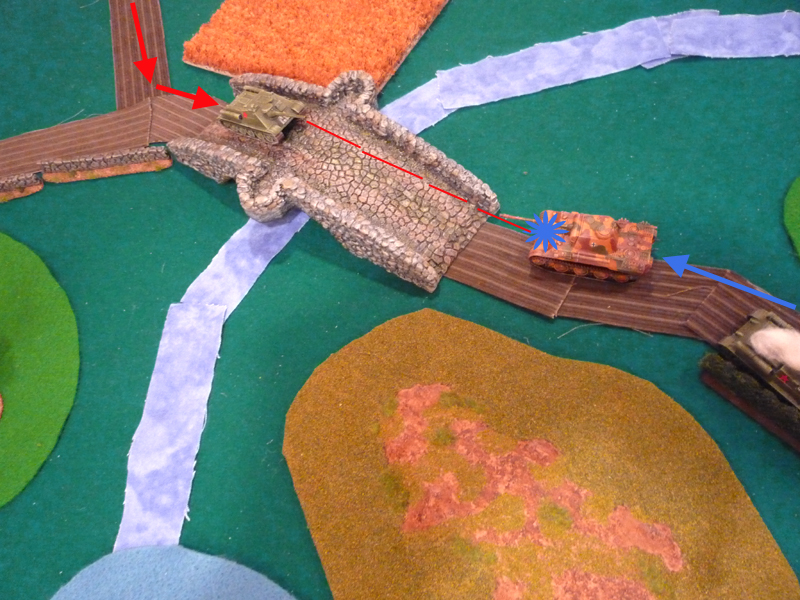 Turn 5:
The Panther pings a shot off the SU-85 armour and the SU-85's return fire misses! The StuG goes next and fires, hitting the T34/85 hard enough to hurt the drive plus cause one permanent damage! The T-34/85 pulls back, but still has his gun undamaged! 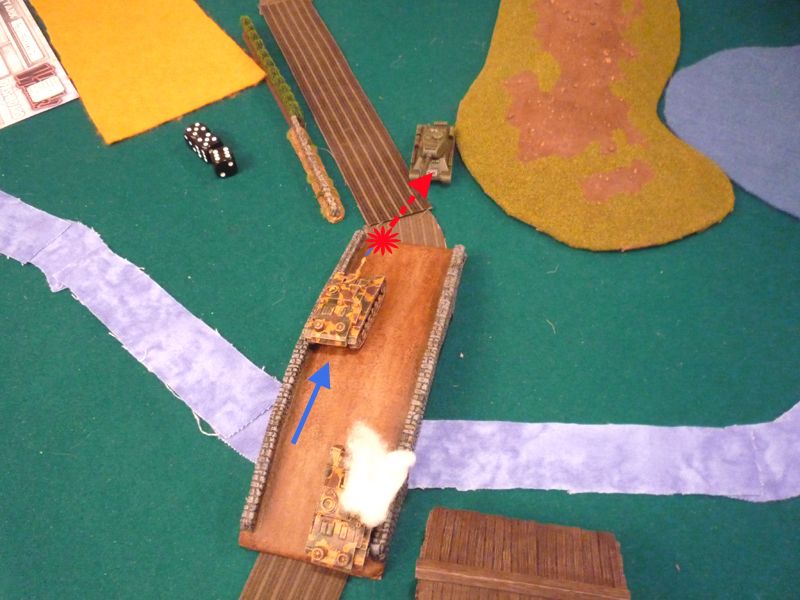 The T34/85 goes next and moves up on to the bridge beside the StuG, swivels his turret, and put a point blank shot into the side armour, brewing up the StuG! 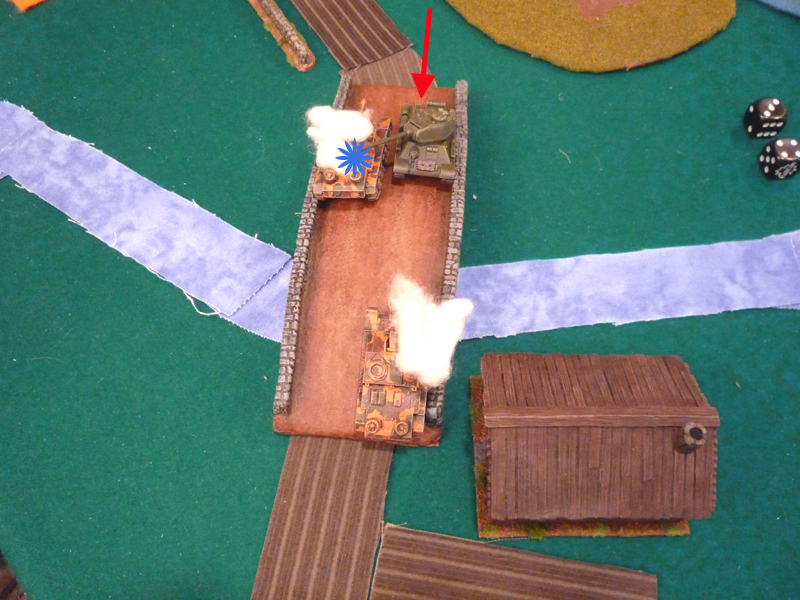 Turn 6:
On the top bridge, the SU-85 goes first and, with a great dice roll, fires three shots into the Panther, not smoking it, but chipping away at it, reducing it down to only one die left, with two dice permanently lost and the rest temporary. So the Germans abandon the Panther and give the Russians the point. 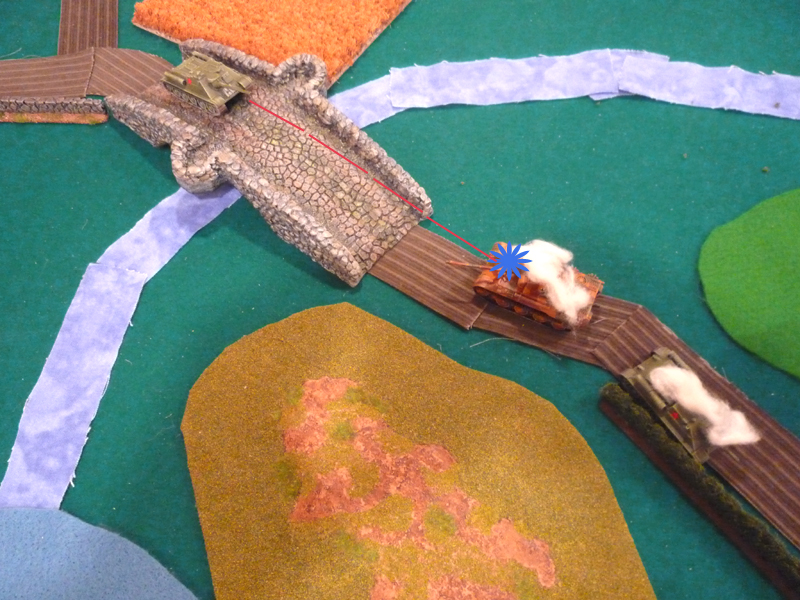 The new StuG goes next, entering on the bottom road but the dice roll dictates that it can't fire this turn, so it just rotates to present front armour to the bridge and holds position, loaded, and waits to see if it lives long enough to fire! The T34/85 goes next, advances up the bridge beside the wrecked StuGs and fires point blank at the new StuG, hitting it and damaging its running gear along with one temporary damage plus one permanent damage! That T34/85 is one tough customer! 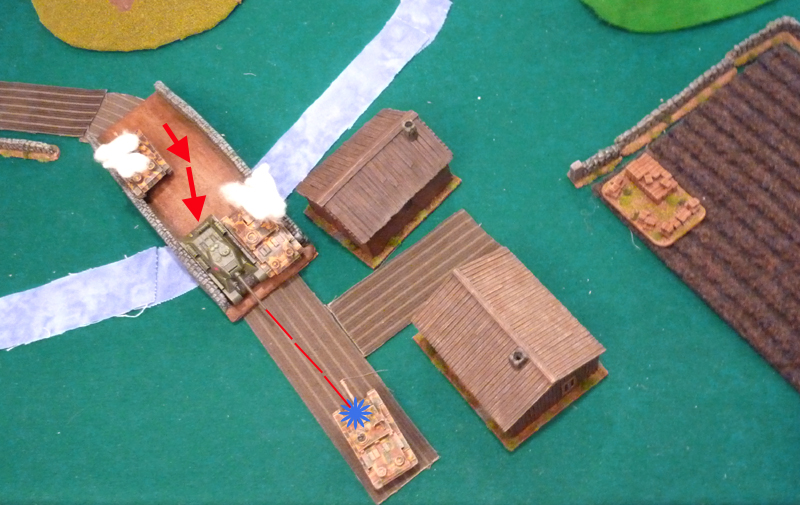 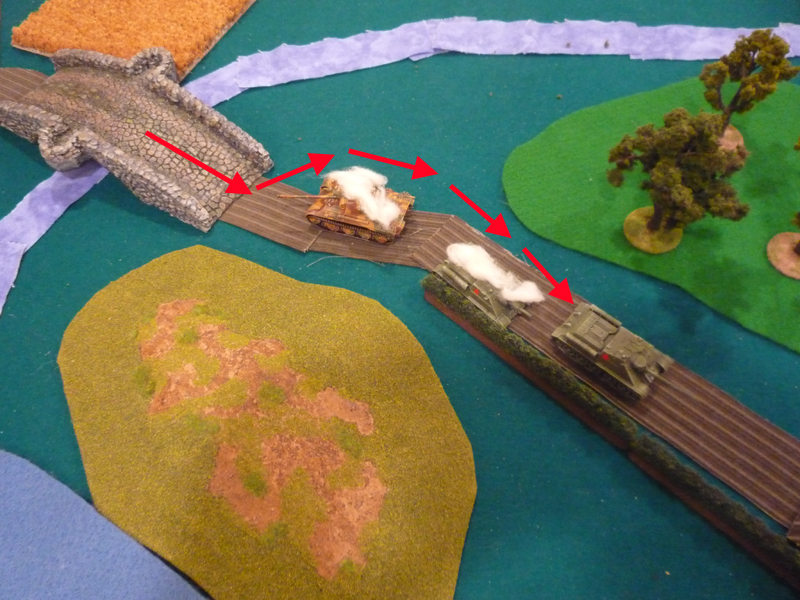 The StuG is hampered by less Command Dice and still can't fire so just holds position and readies for a shot next turn. The T34/85, seeing the new Panther nearby and knowing it will move next, forgoes a shot at the StuG and just reverses back across the bridge out of LOS. The Panther tries to move close enough up the bridge to get a shot at the T34/85 but can't roll high enough to make it into LOS. 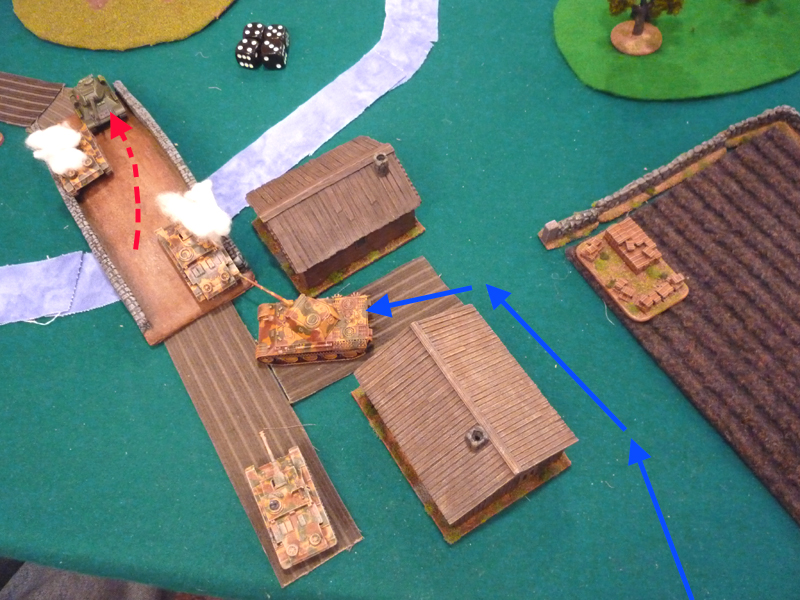 Turn 8:
The Panther goes first and moves up onto the bridge with a clear shot at the T34/85 getting a hit but just a ping. The T34/85 gets a poor dice roll and can't shoot back! The bridge is blocked by the Panther and wreck so the StuG decides to hold position and be ready for a shot if the T34/85 manages to come into LOS. 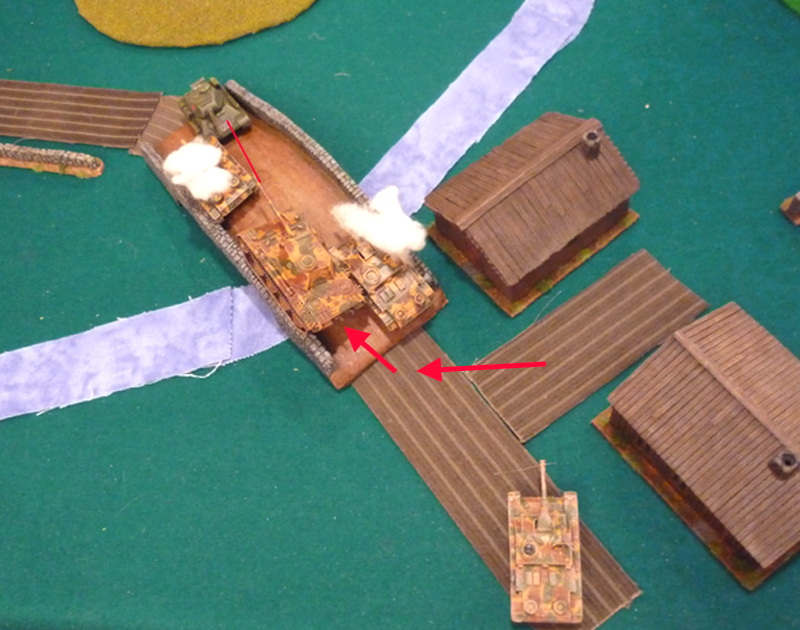 The SU-85 just moves further down the road. It looks like it is making a play for the German ammo dump! 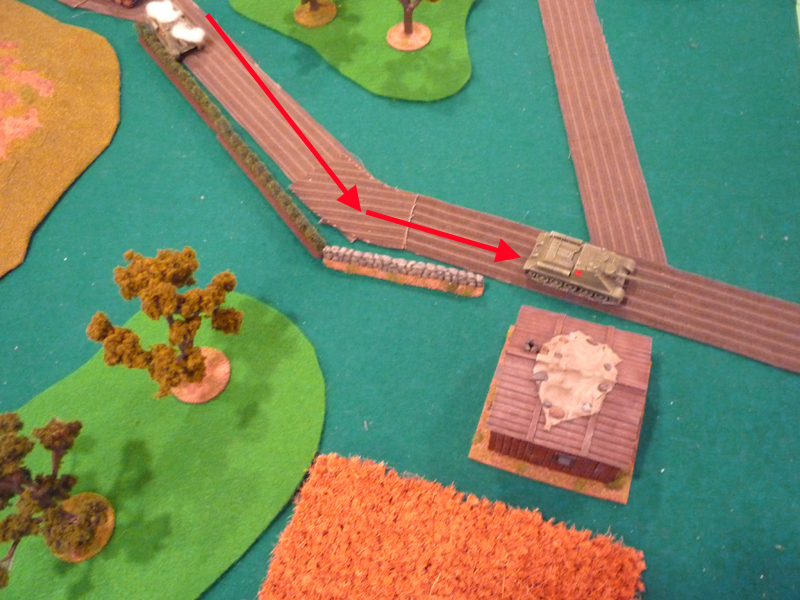 Turn 9:
The Panther goes first and fires at the T34/85 and misses!. The T34/85 now goes next and boldly moves up beside the Panther, fires a side shot into the Panther, and it brews up! That T34/85 is charmed! With the loss of the Panther the StuG, unable roll a fire dice, decides to move up between the buildings, out of LOS of the deadly T34/85. 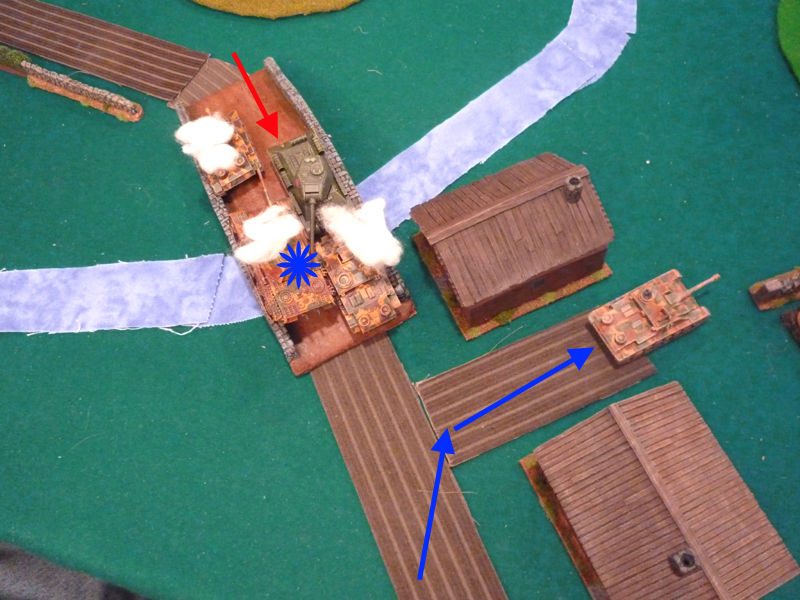 Lastly, the SU-85 moves over behind the building, positions to fire on the StuG next turn, and if successful, perhaps make a dash for the ammo dump. 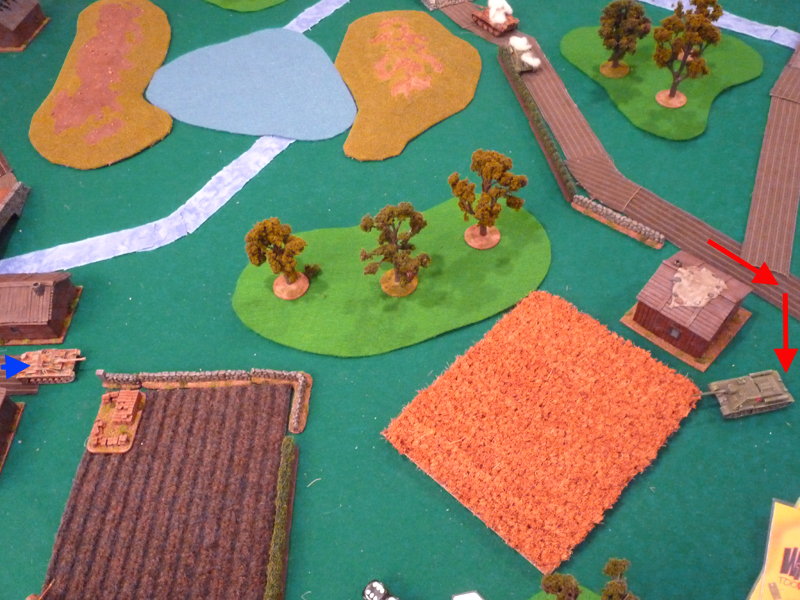 Turn 10:
The new Panther goes first and does not bother with the T34/85 since the bridge is blocked by the two German wrecks, so no fear of a flank fire or a capture of the ammo dump from the T34/85. Instead, the Panther moves up behind a stone wall to be hull-down, but does not get the right dice to fire on the SU-85. The StuG goes next and rolls only movement dice so it tries to encircle the woods to get a future flank shot on the SU-85. The SU-85 goes next and instead of firing at the hull down Panther, moves up and fires two point blank shots into the StuG, missing with the first, but scoring 8 hits out of 9 dice on the second! With only 3 saves the StuG brews up! The T34/85 goes last but cannot advance since the bridge is blocked by wrecks! 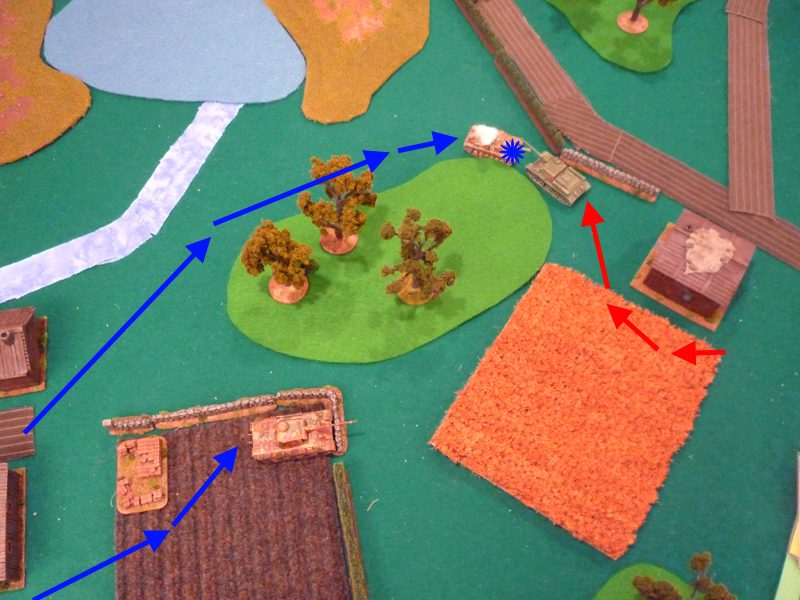 The game ends here on time with the score at Russians 5 and Germans 1. That T34/85 held a lucky charm and caused much mayhem. The south bridge ended up being a mass of mangled German wrecks!

Comments on the What A Tanker Rules:
The rules offer a fast moving, fun, and challenging game that can be played in an evening. We really like the King of the Ring option that keeps everyone in the game. For heavy terrain tables there is a tendency for tanks to move very close to each other to get side/rear shots, and this can be a head-slapper when a tank misses at point blank range. The house rule derived by others adding +2 fire dice within 6" may be an option, but this is a "buckets-of-dice" game and therefore a wide range of results are to be expected. The last fire roll had 8 hits out of 9 dice thrown!

We will revisit these rules for another pleasant experience on those nights we just want to have some good, fast gaming fun.

Email ThisBlogThis!Share to TwitterShare to FacebookShare to Pinterest
Labels: What A Tanker

Your comment will be posted as soon as it is approved by the blog administrator. 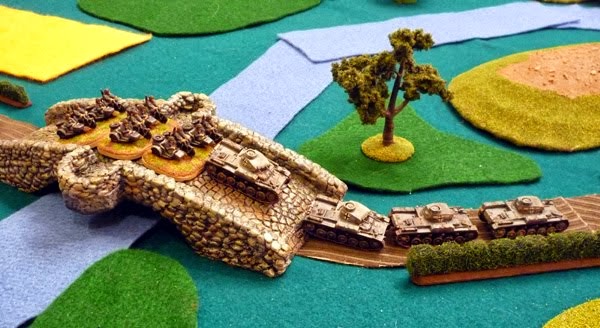